Any chance you were at Convocation today? It’s always good to see our friend the Lowenbrau lion 😉 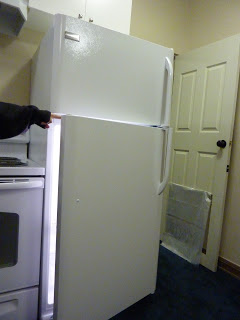 As of this summer, we have a new RA named Adam. He is a pretty awesome guy, and he’ll be covering both Blacker and Ricketts.

We have a history of welcoming our incoming RAs in interesting ways. We do small scale pranks often, but it’s particularly special when we get to use them to introduce new people to our way of life. The summer before my frosh year the RA apartment was filled floor to ceiling entirely with balloons the week before the new RA moved in. Two years ago when our current RAs, Dustin and Katya, moved in, we hung their front door two stories up in the courtyard.

This summer, we may have gone a wee bit overboard. Here are a few of the slight modifications we made to Adam’s new apartment…

The handles on the fridge may be a bit counter intuitive. 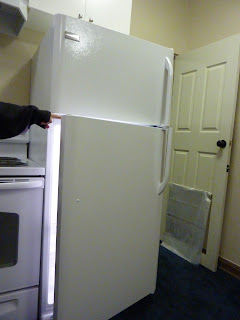 The door between the living room/kitchen area and bedroom is locked, but has a specialty passageway just for Adam. 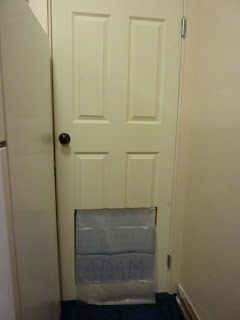 All the taps in the apartment were switched so hot goes to cold and cold goes to hot. In addition, we did something particularly devilish to the bathtub. Usually the handle for the tap faces down when the water is off, and you move the handle up counter-clockwise through cold to hot. In our modified system, the handle starts out facing up when the water is off, and you can turn the knob one way to get hot water, and the other way to get cold. Those are the only two temperatures available… the cold and hot streams cannot be mixed, as the water turns off in between. A bit subtle perhaps, but probably makes for a very confusing bathing experience. 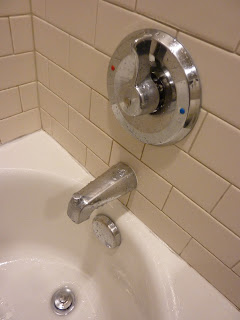 The bathroom was also specially fitted with this personal surveillance device… 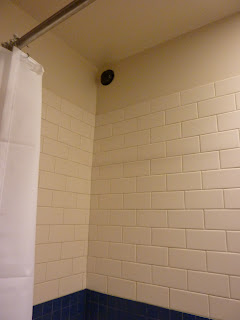 …and a special friend, reading the LA Express. 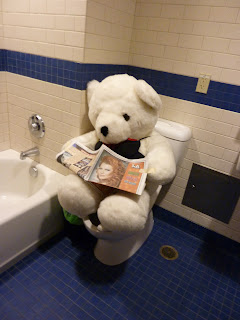 Finally, what may well be the most annoying prank involved the doors to the apartment. Doors in the South Hovses have small interior latches which you need access to in order to open the door from inside. Adam’s apartment has one door that opens to Blacker and one that opens to Ricketts. For the Blacker door, we built a small, very irritating aluminum box that blocked off the locking mechanism on the inside. So if the door is shut, it cannot be opened from within unless you can remove the box. For the Ricketts door, we changed the combination, so it cannot be opened from outside unless you know the new combo. From the outside, it takes quite a bit of time to get from the Ricketts side of the apartment to the Blacker side, involving going down, then up a flight of stairs. Hence, an irritating unidirectional apartment! 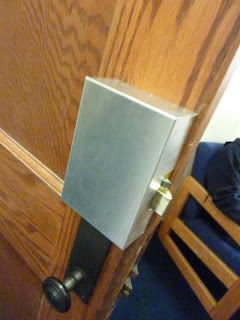 Adam has moved in now, and I think had quite a bit of fun discovering our modifications.

Quite a lot of work for a few good laughs, but I think it was well worth it, and I hope Adam did too 🙂