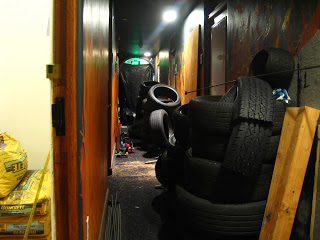 The two most famous projects that occur each year are Interhovse and Ditch Day, which every house participates in. However, lots of moles also like to also work on smaller-scale projects throughout the year. Here is a (very small) sampling of cool projects that I remember from last year:
This annual tradition, peculiar to Blacker Hovse, is probably the most construction-intensive Blacker event after Interhovse and Ditch Day. In it, the frosh attempt to play Richard Wagner’s “The Ride of the Valkyries” (which is strictly banned at Caltech except for 7am during finals week, or if it is played as part as Wagner’s entire cycle of four operas: The Ring of the Nibelung) for as long as possible as the upperclassmen attempt to shut it off. This is traditionally done by barricading the speakers in the all-frosh alley Hell (thus the name Hellride). There have been stories of moles going so far to shut off The Ride as destroying walls, breaking down doors, and once even shooting the speakers when they were mounted at the top of a palm tree.
After several clandestine meetings in the ASCIT screening room, we decided to take the traditional route and hold Hellride in Hell, since this had not been done very much after the renovation of the South Hovses primarily due to fear of excessive damages. After deciding on Hell (specifically, Robb’s room), we made Hell “frosh-only” by closing off the entrances with black plastic, and then started collecting materials as Robb emptied out his room. Among these materials was lots of tires and concrete: 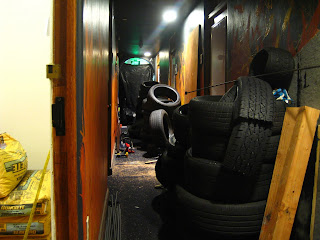 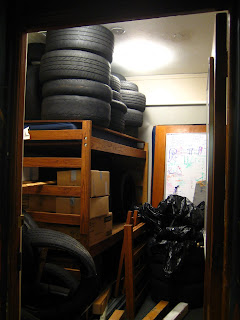 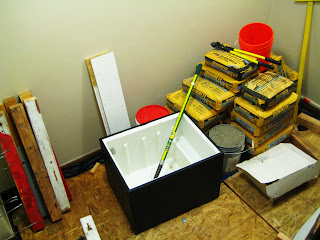 The plan was to replace Robb’s door with a reinforced concrete block, with pieces of tire bolted to the front to absorb much of the inevitable sledgehammer blows. In this picture, about 1/3 of the block had been poured: 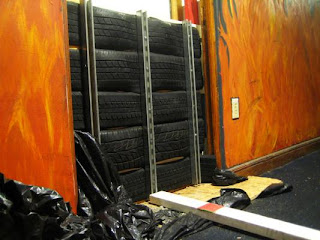 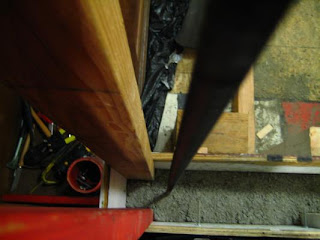 We also needed to barricade the window. This was to be accomplished with 4x4s and concrete. Here’s the form for the window defense; concrete was to be poured in later: 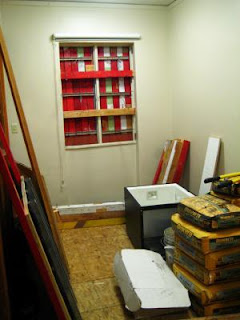 At this point, after several weeks of planning and gathering materials, we were less than a week from the event. However, the morning after these pictures were taken, a Housing employee walked through Hell and, suspicious that Robb’s entrance was covered with black plastic and a sign that said “Frosh Only”, peeked behind. Needless to say, when Housing found out that the room had been emptied of everything (including the door and window) except construction materials, 4x4s on the window, and a partially poured door barricade, they weren’t very happy. They told Brad, the hovse president, that if it wasn’t restored to its original condition within a couple of days we would be paying for it. So sadly, our Hellride was shut down by Housing. But we still held a makeshift Hellride that night, which was still pretty fun even though The Ride only lasted a couple of seconds.

Russell (a frosh) was working on a quadcopter throughout last year, which he recently completed.
Some of us decided that a cool project would be to make homemade rockets. Around this same time, Russell was building a quadcopter, and so our ultimate goal was to be able to launch these rockets from the quadcopter. But we needed to finish the project in time for our annual camping trip in the desert, since it wasn’t really courtyard-safe. The propellant was made from a mixture of approximately 65% KNO3 (oxidizer) and 35% sucrose (fuel). Due to the large sucrose content, the propellant is affectionately referred to as rcandy, short for rocket candy. Unfortunately, the project ran into more hurdles than expected, and when we tried to launch one during the camping trip the rocket’s nozzle blew off, resulting in the rocket burning up its fuel on the ground for a few seconds before exploding. We picked up the project again this summer.
Here’s the rocket exploding: 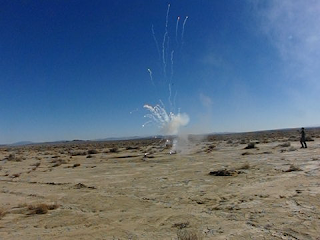 We were trying to launch CDs by spinning them on a dremel, and then flicking them off. While we weren’t able to make them actually fly, we did discover that if a CD with extremely high rotational velocity touches the ground, it explodes. Probably not the safest of endeavors, but incredibly entertaining.
A pressurized water cannon. Built before my time. 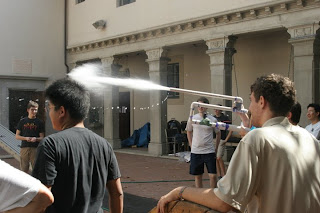 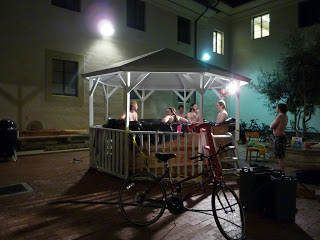 Every summer we put together our homemade hot tub in the courtyard. We fill it with hot water from as many janitorial sinks as we can reach with available hoses, and voila, instant party.

This summer we decided to utilize our gazebo left over from Interhovse. Somehow our hot tub pieces magically fit inside the gazebo, with only minor modification necessary. Classiest hot tub ever. 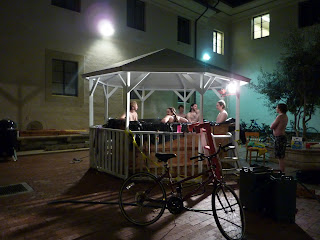 Last summer we had a surprisingly good setup where we pumped water from the hot tub through a hose that led to a set of refrigerator coils on the fireplace in the lounge. This heated the water, which was subsequently cycled back into the hot tub.

There were a few logistical difficulties, such as when one of the hoses popped off the coil and just started spewing water into the lounge. A bunch of us were sitting in the courtyard at the time, and someone walked out of the lounge and asked “is there any particular reason the lounge is being flooded?” Cue everyone freaking out and rushing inside to carry all the now-soggy furniture out of harm’s way. (We even managed to save the rug; thank goodness, it really tied the room together.)

Unfortunately we seem to have misplaced our refrigerator coils, so no automatic heating this year. But I do think the gazebo is an upgrade.

For ages, people have been talking about building a slide from a second story balcony into the hot tub. Maybe next year. 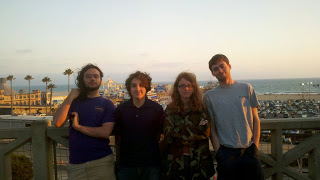 Hi, my name is Liz, and Marissa is forcing me to add this line at gunpoint. I’m a senior, a ChE, and hoping to graduate without horrible gunshot-related trauma.

Contrary to popular belief, techers do get (far) off campus on occasion. On this rare and happy event, we tend to roam, and on this particular day decided to head to the world-famous Umami Burger. This decision was partially prompted by a desire to visit some of our friends working at Google: Santa Monica, who we’d heard were at Umami Burger around then and could hopefully be visited with. Packing six into a cherry-red ’05 Toyota Matrix we set off hungry and confused.

Our first mistake was thinking there was only one Umami Burger. Protip – there are two, and they’re in entirely opposite directions. After calling our friends at the Googleplex, and driving for almost twenty minutes, we realized we were heading towards the wrong Umami Burger.

Our friends from the Googleplex were long gone – likely reclining on their $10,000 couch (protip: when the president of the college is throwing out furniture, even if it’s ugly, take it – it may be secretly worth 10+K). The evening was beginning to grow cool, and the sky that shade of purple-pink rarely found outside of highly processed food. After missing the parking lot the first time, we parked and talked to the maitre ‘d… and found out we had to wait another 40 minutes for a table. But we were at Umami Burger, so we swallowed the bitter taste of denied hunger and did what any reasonable person would do, and went to the beach.

The sunset was rather pretty, though:

Unfortunately, we’d been given a ‘low’ estimate of wait time of about 25 minutes, and it took us 12 minutes to get to the beach. After taking a few photos, and staring longingly at the amusement park rides, we headed back to Umami Burger.

Between the walking and the near two-hour wait for food (from when we left Blacker Hovse), we were all thoroughly hungry… and despite the average $12 pricetag of a small burger, we threw caution to the wind and all ordered two burgers and a side.

The burgers were branded:

And the sides were fairly sized. The cups, despite looking hard-sided and glass-like, were actually plastic and relatively easy to distort and push all the water out of. I learned this the hard way.

The seating at Umami Burger is sort of bench/cafeteria style, at least in the outdoors section, and we were seated nearby another group of students from UCLA. We chatted for a little while about work (and what the hell we were doing at Caltech over the summer), about SCIENCE (to normal people we apparently all sound like physics geniuses), and about… work. Finally, the check came.

Yup. That’s close to 30 dollars a head (tip was already included). But the food was delicious (and very full of umami), so we dug deep into our pockets and then headed out for our next adventure – dessert! We’d passed by a Bloomingdales earlier, and decided that the frozen yogurt shop named 40 Carrots was too strangely named to resist. So, with 20 minutes until the department store closed, we all headed inside, looking entirely out-of-place amongst the stylish women’s clothing and overpriced handbags.

While coming in at nearly 5 dollars a cup (we’d given up on ‘reasonable pricing’ after making our orders at Umami Burger), the frozen yogurt was delicious. They had chocolate, banana, coffee, and some other flavors that were less important – the yogurt was sufficiently tart without being too sour, and tasted like the flavor, rather than over-sweetened crap. We also got some strange looks… from the manequins. Don’t ask.

With our stomachs filled with yogurt and meat, we piled back into our car for the long haul back to Pasadena.